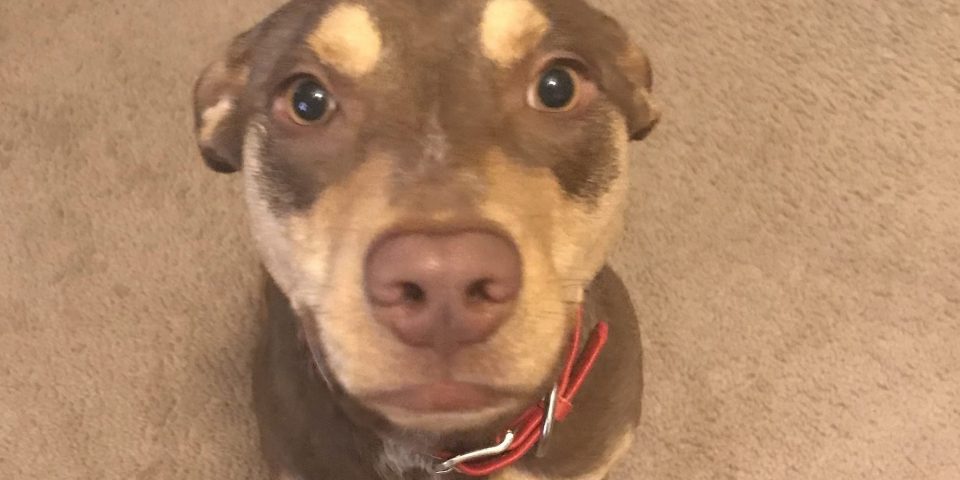 Now, I know what you’re thinking after reading this title. What the pup does Lucca have to do with websites or running Facebook ads? Where’s the usual info on Facebook advertising or marketing stuff?  Nothing much right now, but seriously, just look at that face! Ok, if you keep on reading, I promise I’ll make the connection clear.

My dog Lucca is amazing! He’s a superstar runner at our dog park we used to frequent before quarantine. We’re not taking any chances right now. While housebound and staying safe at home, I know he misses that place. Just to see the joy in his face each time we visit there, running and getting everyone amped up. Dogs love chasing after him! As for the rest of us humans, we stand back and appreciate the race.

Lucca is unbelievably fast. No kidding! Every time we open the entrance gate it’s like releasing a greyhound at a dog race.  No one ever seems to catch up.

He can’t be cornered either.  The other dogs try, but they always fail. He’d pivot and fake with expertise, (like Kobe B. used to, RIP) leaving every dog in the dust.

Until that fateful day…

Lucca was known for his speed. He was called the roadrunner, until that one fateful day when he met two mini Afghan-looking dogs. You know the breed, long white hair with a black, narrow face? The owner told us that even though they look Afghan, they are not. We were told their breed was of Chinese origin, and…I can’t remember the name.

I admit her dogs were cute, but ohhhh they were pure evil.

Like bullies, they’d run ahead of Lucca solely for the pure enjoyment of barking at his face. Any efforts to outrun them were useless. He tried his best to get away many times. He’d pivot as usual but what usually worked, didn’t. Lucca was stopped and cornered way too many times. The evil pair just seemed to be everywhere he turned.

He ran hard around the dog park that day, but eventually tired out. When he laid his head down to rest, the two bullies stood over him. They fiercely continued to bark and created such a spectacle. It was unreal!

Meanwhile, with my marketing eye, it was hard not noticing these dogs had captured everyone’s attention. “Whose dogs are those? They’re so fast! What kind of dogs are they? Where did you find them?” Such the impression those two made. The questions came one after another.

In my mind, their speed and bullying caused a major marketing event. They were so perfectly unassuming! Had these two given away merch novelty items like LED doggie bandannas, they would’ve cleaned house. These little guys were so ahead of their game!

I kid you not. Lucca running with those pups at the dog park is just like running Facebook ads. That’s what Facebook advertising can do for small businesses, (as long as campaigns are run correctly). 😉Running Facebook ads bring attention to small companies and give them that competitive advantage.

If you know what you’re doing, marketing with Facebook is a worthy advertising investment. Small businesses can yield a better ROI compared to traditional marketing methods, AND do not need a massive spending budget to do so.

Nope. You don’t have to have deep pockets like large scale businesses to do well with Facebook advertising. Just like those two miniature dogs that ran ahead of Lucca! With Facebook ads, small businesses can actually surpass their much larger competition.

There’s more! Facebook has a powerful targeting feature that enables small businesses to reach niche audiences. Can you imagine being able to get in front of those who are likely to convert? With FB tools, very specific and often motivated segments of your audience are targeted based on their demographics, interests, and behaviors.

What if you wanted to advertise a dog business you just started? Imagine reaching new dog owners who are interested in the health of their pup’s first year?! You can even layer targeting options to tap into their interests so that your ads get right in front of them…kind of like those two dogs that got in Lucca’s face.

As a result, the rate of converting prospects into leads increases when you’re niche targeting with Facebook ads. With so much potential reach, Facebook levels the playing ground and gives the little guy edge to come out ahead.

Let’s talk about branding. If these dogs launched a branding video ad of what happened that day, I know that ad campaign would take off.

I bet you everyone in the park remembered them. In fact, there was this one gentleman who enjoyed them so much that he inquired on how to get a pup of his very own! He was sold!

Admittedly, they were super cute and kind of funny to look at. They stole the hearts of many watching from the dog park that day.

Powerfully fast and cute. That would’ve been great branding, right? So many people wanted to learn more.

These dogs found a very interested audience and made a great first impression. People engaged with them and would definitely remember them fondly.

Now, if I landed the opportunity to spearhead their Facebook marketing campaign, I’d be all over it.

In fact, I could totally see the ads now. We’d start running Facebook ads by offering free give-aways, like how-to’s. Imagine the headlines:

I would target dog lovers looking for helpful information on their pup’s health. I’ll find dog owners who want to make life for their four legged friend just a little better.

One of the best advantages to Facebook advertising is that it’s not a billboard for people to drive past and forget. People are home right now due to the quarantine. Now is the time to reach your potential clients, while they’re looking for a distraction from all the chaos.

Make meaningful connections with people and they will like you, then eventually they will trust you. The key thing to remember is this, if they trust you, they will want to buy from you.

I know. You might be thinking, “But I’m a small company. I don’t stand a chance against the big guys.”

Well, remember those little doggies? That’s how it is with Facebook marketing.  Running Facebook ads empowers small businesses.  Even with limited budgets for advertising, smaller companies with properly run campaigns, have an edge. They can creep up from behind, and effectively compete against much larger companies with a bottomless ad allowance. Did I mention how unassuming those dogs were? 🙂

As long as your Facebook marketing team determines who your audience is, gives them what they want, and builds an effective strategy that converts…the size of your company doesn’t really matter.

With all the powerful targeting options available on Facebook, business owners can reach their precise audience with opportunities to really connect with customers.

A smart Facebook campaign helps develop customer relationships and build brand loyalty. Even with a lesser budget, Facebook advertising levels the playground for small and larger businesses to market directly to their audience.

My dog is an awesome runner…I think we’re awesome at what we do too. If you want to read more on what Facebook ads can do for your local business, read this.

PrevPrevious6 Benefits of SEO to Your Website: Maintaining a Blog
NextFirst impressions with your website really do MATTER!​Next

Fill out the form to get started.
No thanks, I don't need help right now.